From Milwaukee’s Occupy The Hood: 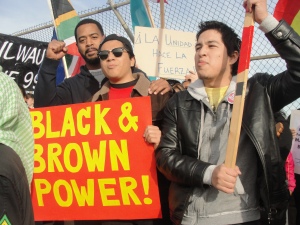 A  personal invitation from the President of the NAACP , Benton Harbor
Chapter:

It is our distinct honor and privilege to invite you on behalf of the
NAACP-BH , the Black Autonomy Network Community Organization (BANCO)
and Stop The Take Over in Benton Harbor, Michigan to an event
scheduled for May 23-27, 2012 .

We are committed to escalating the Occupy Movement to support human
rights in housing in addition to the push back against bailouts for
fraudulent banks. They are stealing our homes and lives.  Democracy is
non-existent here in Benton Harbor.  Joseph Harris, the Emergency
Manager must go!  With pride, he called himself a “dictator.”

The PGA will be played on a $750 million dollar, 530-acre resort near
the lakeshore with $500,000 condominiums. We can not forget the three
golf holes inside Jean Klock Park that were taken from the Benton
Harbor residents.

If your schedule does not permit your attendance on May 26, 2012,
alternative action dates are May 23-25, 2012.  Please let me know if
you can accept the invitation to participate in Occupy the PGA. We
eagerly await your response.  If you have any questions or concerns,
feel free to contact me directly at (269-925-0001).  Allow me to thank
you in advance.We the residents of Benton Harbor love you! 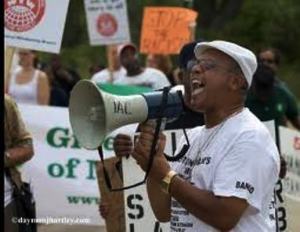 Join transit advocates, concerned residents, unions and community leaders for a rally to save our transit system.

For more information or to RSVP:

UPDATE, Jan. 4: Bryan, Andy, their attorney and & other supporters went to court today. There has been an adjournment for the trial until Thursday, Feb. 16 at 1:30 p.m. We hope to see you then. Thanks much to all those who came out to support us today. We are now mobilizing to pack the court on Feb. 16. Updates available at: www.wibailoutpeople.org. We also need contributions for the defense campaign, you can go to the website and click on the Paypal button, everything helps. Thanks again & Solidarity Forever!

“Bryan Pfeifer is being targeted for political repression and criminalized because of his persistent organizing against the reactionary Governor Walker who is attempting to outlaw labor unions in Wisconsin. Bryan is also known for his persistent anti-racist opposition to war and repression. He works tirelessly to organize in solidarity with the Anti-War 24 who were raided or subpoenaed by the FBI, including Carlos Montes now facing phony felony charges in Los Angeles. We call on you to support Bryan Pfeifer and all those struggling to build a better society!

–Tom Burke for the Committee to Stop FBI Repression, www.StopFBI.net

Ask clerk what court Pfeifer’s case will be heard in.

Statements of support and inquiries:

Donations are urgently needed to defray costs of the defense campaign, Use Paypal button at: http://www.wibailoutpeople.org. On right hand column on this page.

Bryan and Andy were arrested August 26, 2011 while protesting Scott Walker’s appearance at Messmer school in the Riverwest neighborhood in Milwaukee. Both were charged with one municipal citation each of Resisting/Obstructing an Officer. The city claims it has ‘lost’ Andre’s ticket and has up to two years to issue him another one.

Andy and Bryan are fighting these bogus charges because they are an attempt to put a chill on the entire progressive political movement in Wisconsin and beyond. These charges are also an attempt to stop those fighting  racism, police harassment and brutality, union-busting and other austerity measures on poor and working people. We will not be silenced! We will not allow our constitutional rights to be taken away! Protesting Scott Walker and other politicians’ attacking poor and working people are not crimes!

The WI BOPM thanks supporters who are already helping on this campaign. We still need your help and many others. A victory in this campaign will be a victory for everyone in the progressive movement. If you can help with fundraisers or other activities please contact us. PACK THE COURT JAN. 4, 2012!!

“It is with great honor that I add my name in support of one of the most progressive voices crying out for the redemption of the forgotten and exploited masses, Bryan Pfeifer. I have known this man for more than ten years as both a student of mine and an organizer for the upliftment of the oppressed masses whether they are workers or unemployed.

His voice has resounded on the campus of UW-Milwaukee and in the community of Milwaukee in support of the rights of the exploited and oppressed. We have a history of working on the campus and in the community together. We were on campus in the support of the rights of the custodial workers at UWM. Recently we worked together on the rally against the “Nazi” protest here in Milwaukee. I can attest to the righteous and unselfish character of this young man. He has been a persistent and consistent freedom fighter for the rights of exploited and oppressed regardless of their cultural reality… He is a person who comes to a space and rolls up his sleeves and begins to organize and carry out the tasks that help to educate the forgotten of their rights to a decent quality of life… He is not selfish with his skills as he quickly reaches out to help youths to understand their responsibility to make this a better world.

…I submit these words in testimony to what I consider a man of the people in all respects.”

“I have known Bryan Pfeifer for several years. As an immigrant rights activist, I have found Mr. Pfeifer very helpful in facilitating my work for immigrant rights. He was helpful in connecting the May 1st coalition in NYC with a Wisconsin union leader for our rally on May Day of this year. He is helpful in helping to link immigrant activists in Wisconsin with us in New York City. My experience with Bryan has led me to see him as a thoughtful, serious and kind person.” 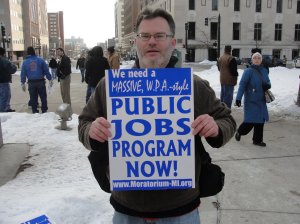 If you’re following us on Facebook then you’ve probably already heard about Emilio and Erick, if not here’s the scoop. Both Emilio and Erick are teens from Georgia, both are DREAM Act eligible, and both are currently sitting in a jail cell awaiting transfer to ICE custody.

Each of them were pulled over by the sheriff’s office and that’s what landed them in custody.  Emilio’s case seems like profiling to us; he was pulled over for an expired tag which turned out to be valid for another month! Attorneys working on their cases will figure out the details but right now we need your help to make sure ICE drops its immigration hold on both of these teens. It should be easy if ICE is honest in telling us they do not want to detain DREAMers, right?

Will you join us in making 100 calls to get Erick and Emilio out of jail and back with their families?

Sample Script: “Hi, I am calling to ask that ICE lift its hold on Erick Lara (inmate #914358) and Emilio Castro (inmate #914405). Both of them are DREAM Act eligible and are being held by the Cobb County Sheriff’s Office in Georgia. Please lift your ICE hold so these DREAMers can go home to their families.”

**The person who answers may try to get rid of you by sending you to a different number. If so, be persistent, tell them you simply wish to leave the message with them and give them Erick’s and Emilio’s inmate numbers.

In n the last month we were able to get David, Cesar, and Gustavo out of detention. Now let’s make sure Emilio and Erick do not even get inside a center, no one should go through the trauma of that. Our goal for today is 100 calls for Emilio and Erick and we know we can count on you to help us reach that goal.

Oh, one last favor. After you call reply to this e-mail and tell us how it went so we can keep a tally.

Thank you for your help.

P.S.   On twitter? Send this simple message: #DREAMAct youth spent Xmas in jail. Tell @wwwicegov to lift #ICEhold on Erick & Emilio to get them out. bit.ly/iceholdga @dreamact