The GEO works to find common ground among all graduate employees, regardless of race, gender, religion, disability, sexual orientation, citizenship status, department, job category, or membership in the union. Membership in the GEO is, and will remain, voluntary.

#Solidarity from Graduate Students United at U Chicago. Thank you for supporting as as we go into Day 3 of our strike.

Join the Young Workers Committee of the Milwaukee Area Labor Council for a night of solidarity and socializing for under-40 workers. We will provide the drinks!

This happy hour will feature a story slam, entertaining short stories on the topic of “working union vs. non-union.”

The Young Workers Committee is a group for under-40 workers to meet other union activists and leaders, build leadership and organization, and sharpen knowledge and skills to revive unionism for today’s working class. We organize trainings, discussions, socials, and support workplace actions such as strikes and pickets in order to help rebuild union culture and build working class power among young workers.

Non-union represented workers who are interested in the benefits of a union or who want to learn how to organize their workplace are welcome to attend!

Koreans have existed as a distinct ethnic and linguistic people for thousands of years. But in 1945, Dean Rusk, then a U.S. Army colonel, split the Korean nation into two parts, drawing a line on a map at the 38th parallel. Ever since, the U.S. military has occupied the southern half of the Korean Peninsula.

For three years, 1950-53, the U.S. carried out a brutal war of annihilation against the socialist north, the Democratic People’s Republic of Korea. At least two million Koreans were killed and every building over one story in the north was destroyed. The U.S. dropped more bombs on North Korea than it had during the entire war in the Pacific against Japan.

At great cost, the Koreans held out and the U.S. finally agreed to a ceasefire in 1953. But, despite repeated requests by the north, the U.S. has refused to even discuss a peace treaty. Instead, it has tried to destroy the country with economic sanctions and international isolation, intensified after the collapse of the Soviet Union.

Despite this, the people of the DPRK have built up from the ashes a society that reflects their desire for self-determination. The DPRK has 100% literacy and is among the most advanced countries in maternal health and survival.

In the southern half of Korea, a broad popular movement that toppled the last president for corruption is pressing for better relations with the north. This was clearly seen at the Winter Olympics in Pyeongchang, when South Koreans joyfully applauded a joint north-south team. But the U.S. is completely hostile to these efforts. On the contrary, it openly threatens the DPRK with nuclear annihilation.

With all the troubles affecting us here in the U.S. — underemployment, racism, state repression, lack of healthcare and affordable housing — we oppose giving the generals in the Pentagon more money. Trump has already broken records on Pentagon spending — proposing $719 billion for 2019 — while 50% of children in the United States require some form of food assistance and the infrastructure falls apart.

By signing this pledge, I promise to do whatever I can to stop U.S. aggression against the Korean peninsula.

Hands off Korea! No war, no sanctions! 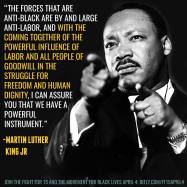 Joe Mchahwar is here again to talk about the Syrian conflict and the context of how the imperium sows chaos.Are the prospects here for the war to wind down after the clobbering of ISIS, or expand over Us-Russia or Israel-Arab tensions?