There was a second weekly demonstration in downtown Detroit on Jefferson avenue near the tunnel at the United States-Canada border on Mon. Feb. 24, 2020 during rush hour.

The action was again in solidarity with the Wet’suwet’en First Nation people in British Columbia in Western Canada.

This protest was called by the Moratorium NOW! Coalition and the Michigan Emergency Committee Against War & Injustice (MECAWI) along with other organizations which endorsed and participated.

The First Nation people are attempting to halt a gas pipeline being constructed by corporations on their lands. A leaflet circulated by activists at the scene of the manifestation in downtown Detroit said of the situation that: “For over 7 years, TC Energy (formerly TransCanada Corp), has tried to push a $6.6 billion, 670-kilometer
Coastal GasLink (CGL) fracked gas pipeline through Wet’suwet’en territory. The pipeline would carry fracked gas from Dawson Creek, B.C. to the coastal town of Kitimat, where LNG Canada’s processing plant would be located. The CGL pipeline is part of a $40 billion
fracked gas plan by LNG Canada to build and operate a terminal for the liquefaction, storage, and loading of liquefied natural gas. LNG Canada is the single largest private investment in Canadian history.”

MINI DAILY ACTION: Make a Facebook status or tweet that reads “I love my public school because [fill in your amazing personal story here].” Tag your local elected officials or write the reason on their wall so they can see why Public Schools are the heart of our communities! Don’t forget to use the hashtags #PublicSchoolProud and #WeLoveOurPublicSchools.

It is not too late to make this week count!

If you are looking for some more joy, check out all the cool things we have been sharing on our Facebook page, the art gallery is ONE OF MANY!

Thank you so much for all that has already been done to make this week successful, 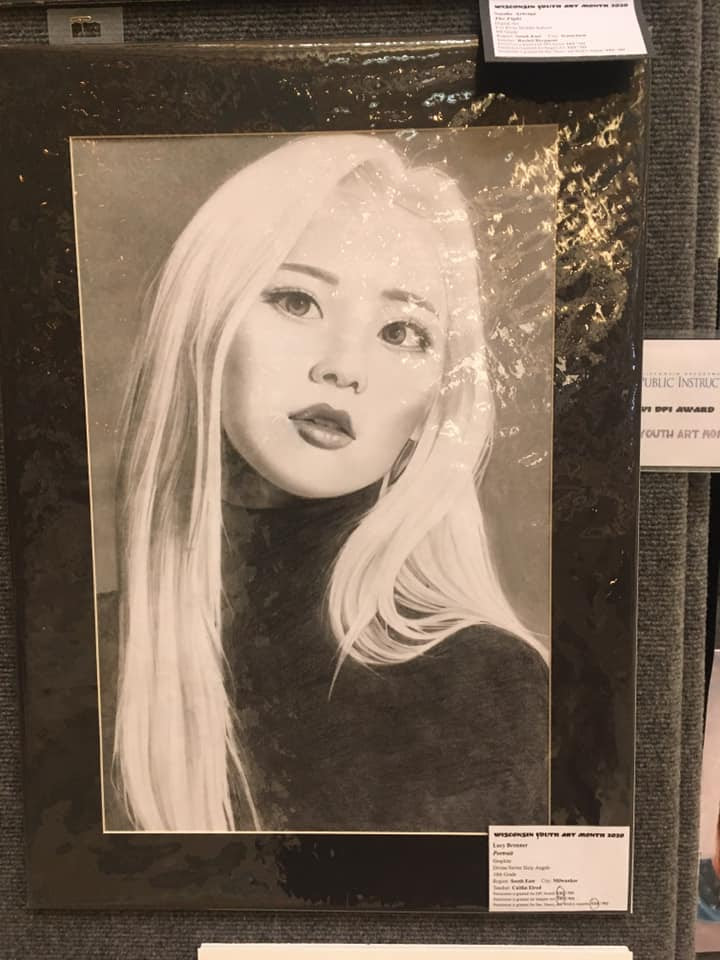 ‘Milwaukee Shooting Motive Is Blamed On Alleged Racism At Brewery With History Of Complaints:’ https://bit.ly/2Pv25op

Due to the tragic events at the brewery today (Feb. 26, 2020), the brewery will be closed through the weekend per Brad Long and Brewery Leadership.

24 hour notice will be given for when they plan to start back up.

Be safe. Hug your loved ones a little tighter. Keep our Milwaukee Brewery family in your thoughts and prayers.

Join the celebration! It has already been one year since the New York State AFL-CIO launched the Union Strong podcast. President Mario Cilento stops in the studio to help us mark our one-year anniversary.

But first; employees at the crowdfunding platform Kickstarter are making history. They are the first employees at a major technology company in the U.S. to unionize. A Kickstarter employee and spokesperson for the newly unionized Kickstarter United explains why and how it happened and what’s next.

The Wisconsin Legislature has passed a package of so-called “tougher on crime” legislation. But let’s be clear: these measures would weaken public safety by destabilizing families, weakening communities, and diverting resources away from priorities like mental health and addiction treatment.

Our legislature should be working to support communities and families, not needlessly putting more people behind bars.

Tell Governor Evers to stand with communities and veto these measures now!

Dear Supporters of Peace, Respect for Law, and Justice,

The only reason why the Protectors were able to mount a successful defense was because of the extensive moral and financial support they received from all advocates of peace and justice throughout the country. With your support their lawyers were able to mount an effective fight in defense of the Protectors, even though the judge had ruled most of their evidence off limits.

But that fight has been expensive. With your help, we were able to raise funds beyond our originally estimated goal. But almost all of our funds have already been expended, and the Protectors will urgently need additional funds should the sate decide on February 28 to retry the case.

If the state decides to go forward with another trial, we must be prepared to support them with whatever it takes. Although we have increased our fundraising goal by another $40,000 to prepare for a longer legal fight, we need to have at least $10,000 of it in the Defense Committee’s account by February 28.

We understand that some of you may be waiting to see what happens on the 28th before giving again. But please let us suggest to you that we can’t wait. Please give what you can now, and pass on to everyone who might be in a position to give.

We need to demonstrate to all who may be monitoring our actions that the Embassy Protectors have the capacity to defend themselves if the prosecution makes the mistaken decision to retry the case.

This is a fight that can be won. But it will only be won with your help.

Our Struggle for Justice Continues.

Just checking in during We Love Our Public Schools Week to say THANK YOU to everyone spreading the love for our students, staff and schools – the response has been AMAZING this year and we are loving the love! Let’s keep it going all week long! #PublicSchoolProud

AND I have  a very important reminder: The deadline for both EARLY BIRD REGISTRATION and PROPOSALS for our 6th Annual  Summer Summit on July 24 in Sun Prairie is THIS SUNDAY — March 1!

Regular registration is $40 – save $15 by registering before March 1 for just $25!
If you were waiting for a personal invitation….this is it! Our Summit Summit is the one time of the year we ask everyone in the state who’s ready to put politics aside and fight for what’s best for our students to come together to connect, plan, learn, and have some serious fun.  The agenda includes a mix of keynote presentations, special guests, and action-oriented workshops and breakout sessions that dig deep into the most important issues facing our students and schools.
Don’t miss the public education event of the year!  Can’t wait to see you all in Sunny P!

When we hear the word sanctions, most Latin America solidarity activists think immediately of Venezuela. But Nicaragua is also the target of unilateral coercive measures illegally imposed by the US and the most serious sanction, the NICA Act, can’t be blamed on the Trump regime since it was imposed by Congress. Unilateral sanctions are illegal under both the UN and OAS Charters. Alliance for Global Justice is partnering with Friends of Latin America, a local committee in the Washington, DC region, to target both the Trump regime and Congress with a petition and letters to Congress demanding an end to illegal sanctions against Nicaragua.

The Trump regime has sanctioned a number of individuals, such as Vice President Rosario Murillo and functionaries in the Sandinista government, police, and army. These sanctions have an impact beyond the individual sanctioned because banks, importers, and potential investors are worried that any transaction they conduct with Nicaragua could be found to violate US sanctions resulting in loss of business with the world’s largest economy or even multi-million dollar fines.

The Nicaraguan people rejected the US-funded coup attempt in 2018 and the economy is recovering toward pre-coup levels, but US sanctions create uncertainty internationally. From experience we know it is harder to wire money to Nicaragua than it was before the coup and any business has to think twice before investing in new factories or expanding current ones. It is indicative of the US’s fading influence that there is as much post-coup investment as there is! ….

In the past two weeks, the Wet’suwet’en have faced brutal colonial and corporate violence. The RCMP forcibly removed community members and land defenders from their yintah (land) with snipers, helicopters, and dogs.

But, an incredible indigenous rights movement is fighting back. The best and most urgent ways you can show up right now are:

Rail and port blockades continue to hold across so-called Canada, and the Canadian legal system is trying to criminalize and remove land defenders with sweeping injunctions. The grassroots community has been organizing inspiring, revolutionary actions in solidarity with the Wet’suwet’en Nation.

The Tyendinaga Mohawk community and allies have been holding a rail blockade on their territory for over two weeks in solidarity with Wet’suwet’en, and were just removed in a violent raid by the police last night. Already, a grassroots uprising has responded by blockading one of the largest bridges in Montreal, blocking the port in Vancouver, marching in Ottawa- and over 8 blockades created in one day.

We need you to show up to support this incredible resistance. Donate, and start organizing in your community today.

By burning illegal injunctions and continuing to hold prayer and ceremony in the face of colonial and corporate violence, the Wet’suwet’en maintain a powerful and inspiring praxis.

We demand that the Coastal GasLink project not move forward without Indigenous consent, and that the Canadian and B.C. governments remove the RCMP from Wet’suwet’en territory.

No matter where you live, there are relevant actions to plan. As mentioned in the Wet’suwet’en strong supporter toolkit, there are many responsible for the Coastal GasLink pipeline.

First, hundreds shut down all of the above-ground entrances to the B.C. Legislature building, postponing the Throne Speech, after over a week of holding protests drawing thousands to put pressure on John Horgan- premier of British Columbia. 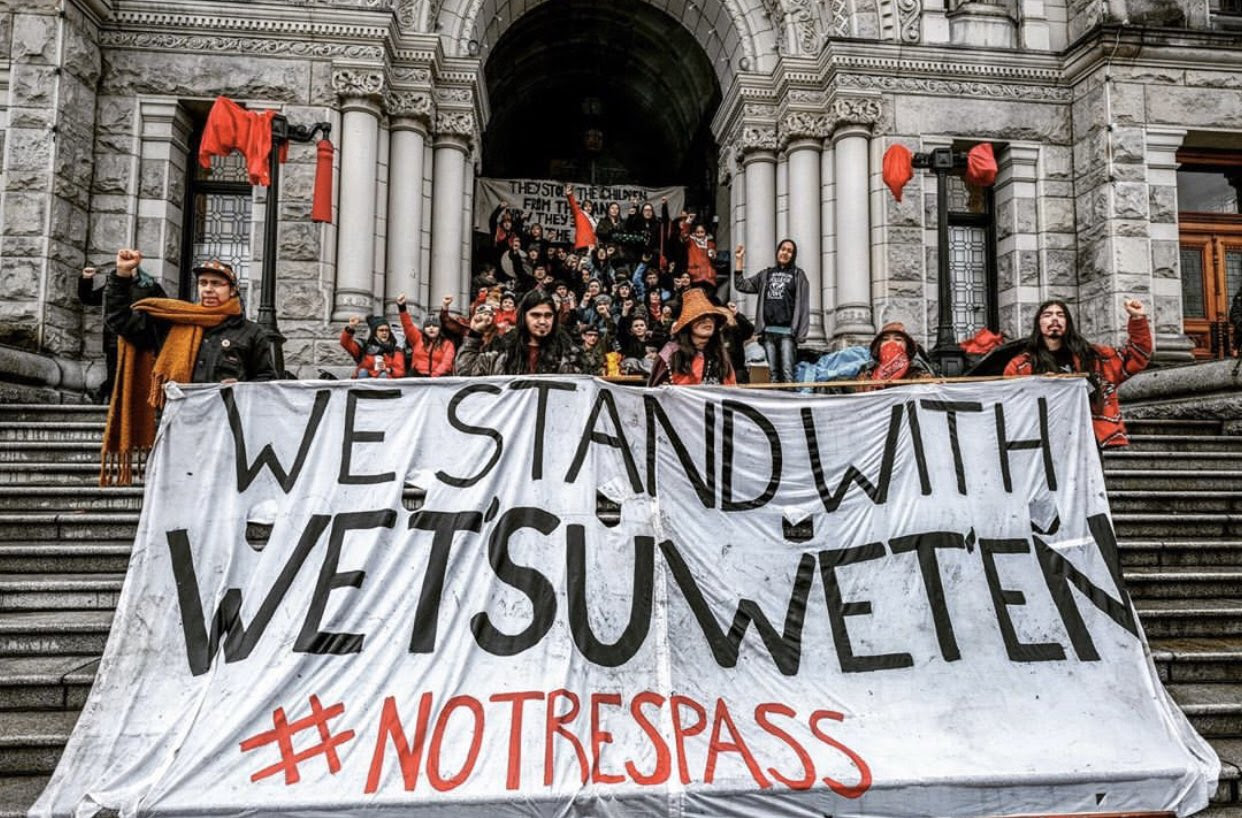 Second, hundreds are targeting investors. Just last week, hundreds of people in London targeted one of the biggest CoastLink pipeline investors who is planning to buy 65% of the project, KKR. The fierce land defenders sat in at their office 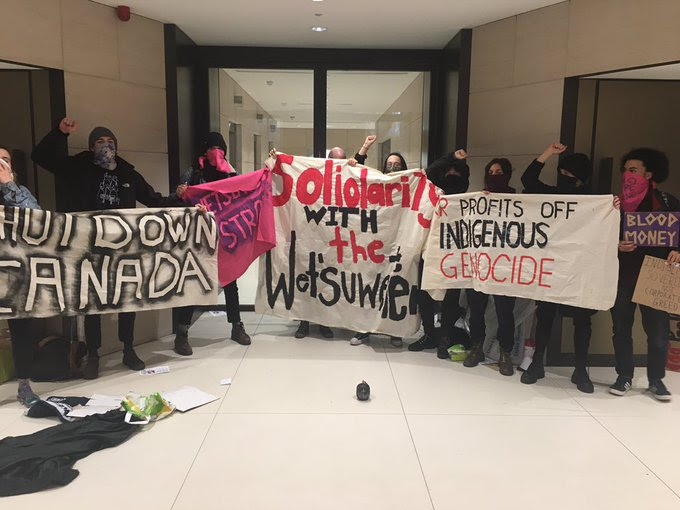 We’re also excited to announce that Rising Tide North America will be sharing more organizing strategies in the coming weeks. Stay tuned for that!

In the meantime, if you’d like to stay in the loop on all the amazing resistance coming out of Canada right now,, sign up for the Unist’ot’en Solidarity email list. It has a daily summary of actions and news from camp.

PS: Also, even as the Canadian state continues in their violent and colonial ways, there are major victories. Indigenous land defenders and campaigners had a major win yesterday, as Teck Frontier the largest ever proposed tar sands mine has rescinded the application in recognition of Indigenous rights and title, the climate, and the uncertainty of construction in Canada.

I am happy to report that the first day of #WeLoveOurPublicSchools Week was a booming success! Let’s keep is going!

MINI DAILY ACTION: Share a post on your personal social media or group page celebrating schools in a district other than your own! The post above from Kenosha Unified School District is a great example. We have also shared a lot of examples on our Facebook page. This action emphasizes that Public Schools are loved in every corner of the State!

Have a wonderful day full of love for Public Schools, 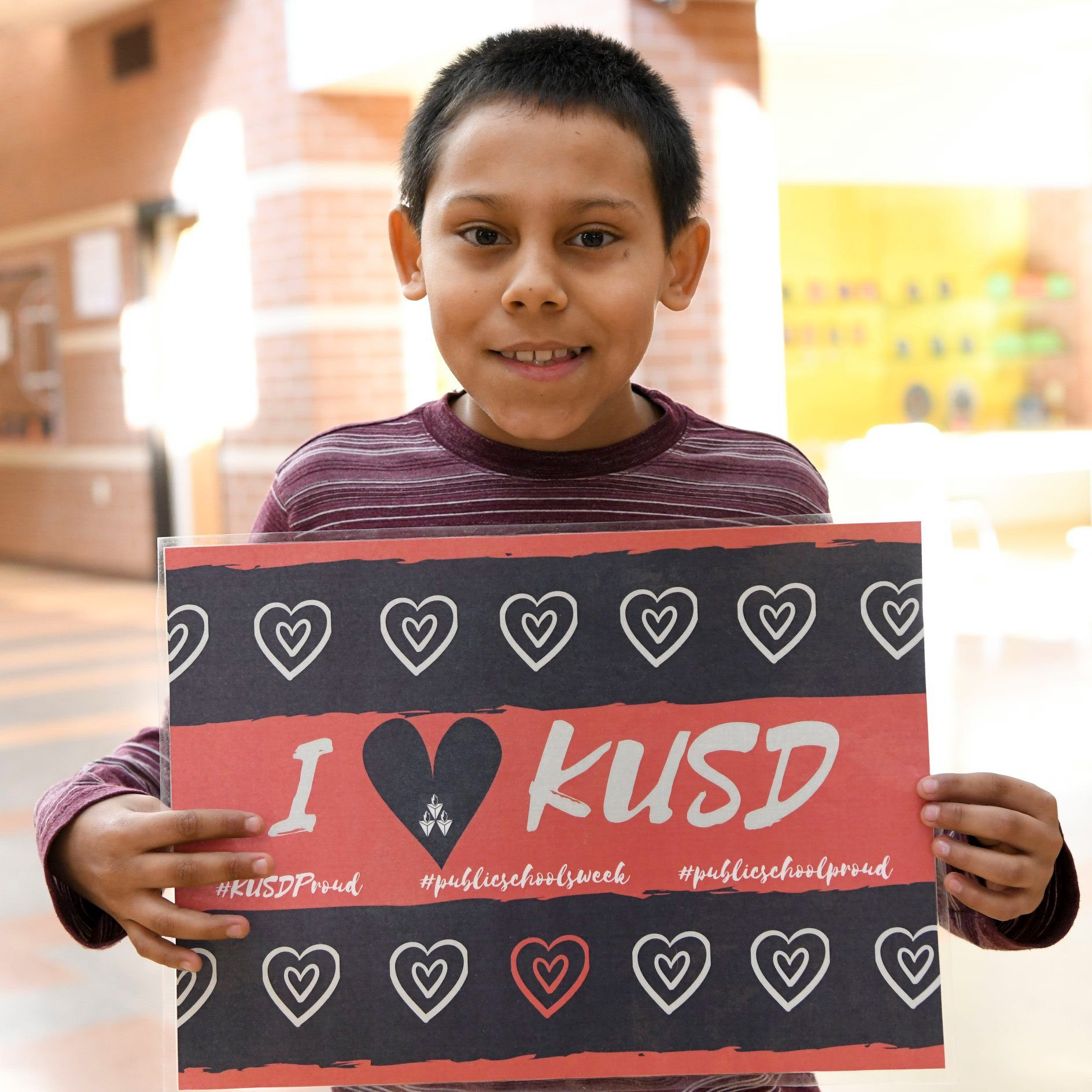