Check back for more cities! Call 414-643-1620 or email mramirez@vdlf.org if you want to help organize a bus from your city! http://vdlf.org/may1bus/

The U.S.-supported reactionary state of Colombia has been hunting down Afro-Colombian and Indigenous activists who have been struggling for their human rights on ancestral territories. After the Transatlantic Slave Trade began forcibly transporting Africans to Colombia in the 1520s, some Africans were able to break away and settle in rural environments, where they have lived for centuries as self-sustaining people.

Sara Quiñonez and Tulia Marys Valencia—daughter and mother, respectively—were arrested on April 20 on phony charges of narcotics trafficking and terrorism.

The Colombian government has already received so many messages of support for these sisters, the state apparently has disabled the email account.

The best way you can support Sara and Tulia is by posting messages on social media. Tap this link for language you can use.

May 2 will mark the fourth anniversary of the murder of scores of anti-fascist activists at the House of Trade Unions in Odessa, Ukraine. Although there are many videos of the massacre, not one of those responsible has ever been punished, and the people of Odessa have never stopped demanding justice. In 2016 UNAC organized a delegation of U.S. activists to attend the second anniversary memorial in Odessa. We then formed the Odessa Solidarity Campaign as an ongoing UNAC project. (https://odessasolidaritycampaign.org) This year, solidarity events will be held in many cities across Europe as well as here in the U.S. We strongly encourage our members and friends to consider holding one in your area. For more information: UNACpeace@gmail.com or DefendersFJE@hotmail.com.

Aba had been invited to the U.S. by the Conference of Catholic Bishops and several other religious organizations for a speaking tour on the situation in the Philippines and Mindanao.

According to Jerome’s recounting to Karapatan, a Human Rights Alliance in the Philippines,  Aba was held for 28 hours at SFO and endured physical and psychological torture and harassment during his detainment. The entire time, U.S. Customs and Border Protection (CBP) held Aba incommunicado — they violated his basic civil and political rights, and withholding his access to a lawyer.

After this interrogation and torture, Aba was deported back to the Philippines where he was met by a member of the Philippine congress and human rights supporters.

Click HERE to view Jerome’s press conference with human rights organizations at the BAYAN National Office in Manila. Click HERE for  a description of Jerome Aba’s treatment at SFO.

BAYAN USA is a coalition of Filipino organizations in the U.S. and a member of UNAC. 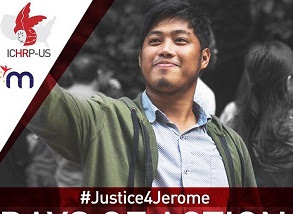 As the US commenced its missile attack on Syria, people took to the streets in dozens of cities around the country as part of the spring actions to end the wars at home and abroad.  People rallied from coast to coast demanding an end to the bombing of Syria, an end to the Israeli murder of unarmed protesters in Gaza, to bring the troops home from the many theaters of US war and to close US military bases around the world.

The actions were sponsored by the broadest coalition of antiwar and social justice forces that has been able to come together in many years.  This unity was enabled by the danger that the US military and its allies pose as they step up threats and military actions around the world.  It represents a step in the direction of unifying antiwar and social justice forces to build the kind of movement in the US that the rest of the world is looking to us to build.

To see reports from many of the actions: 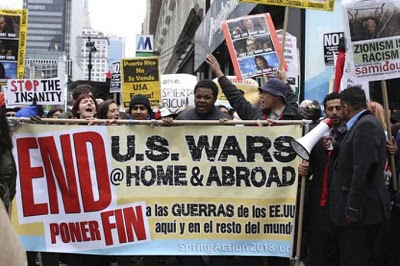 In what may be the largest educator walkout in history, these educators will join tens of thousands of teachers and educational support professionals (ESPs) across all of Arizona in walking out of their neglected classrooms. Led and supported by the Arizona Education Association (AEA) and Arizona Educators United (AEU) through its #RedforEd movement, Arizona educators are bringing their demands for adequate educational funding directly to state lawmakers in Phoenix, where they will be joined by NEA President Lily Eskelsen García.

No state in the country has cut school funding more than Arizona. Between 2008 and 2015, state lawmakers cut funding per student by 36.6 percent, according to a national analysis by the non-partisan Center on Budget and Policy Priorities. (Second is Florida, which cut funding by 22.2 percent during those years.)

On May 1st 2018, Voces de la Frontera has called for a statewide Day without Latinxs & Immigrants to demand that Waukesha County Sheriff Eric Severson not turn his Sheriffs into ICE agents through the federal 287g program. Scroll down to find organizing tools.

This means no work, no school, and no buying from large corporations. We will hold a statewide march in Waukesha at 10am, starting from Cutler Park on Wisconsin Ave. Click here for flyers.

Click here for bus information from cities across the state, and to reserve your spot on the bus.

Join us to talk about important preparations for the May 1st March for Immigrant, Worker & Student Rights. We demand Waukesha County Sheriff Severson not turn his deputies into ICE agents through 287g; that Governor Walker return drivers’ licenses to Wisconsin immigrant community members; and not one more deportation! Join us!

Hosted by Coalition for Justice in Palestine – CJP

Protest for #Nakba70 &Right of Return: Stop The Massacre in Gaza

March 15th, 2018, marks 70 years of the ethnic cleansing of almost 800,000 Palestinians from their homes and lands, at the hands of zionist gangs. Now, the situation in Palestine is just as urgent.

Israeli colonial domination continues to entrench itself across all of historical Palestine, led by one of the most right-wing governments Israel has ever had. The Israelis have used unimaginable brutality in response to the#GreatReturnMarch in Gaza, using chemical weapons and murdering dozens of unarmed protesters, including members of the press. And of course, Gaza’s Palestinians are in their 12th year of living under a brutal siege that has made life there almost unlivable, according to the UN.

Across the West Bank, the Israelis continue to move towards de facto annexation of large swaths of land. The corrupt Palestinian Authority (PA) is pushing for a meeting of the Palestine National Council to grant legitimacy to Mahmoud Abbas and his cronies. In addition, the racist U.S. administration, backed by both parties, has announced that it will be moving the U.S. embassy in Israel to Jerusalem on Nakba Day itself! And Palestinians inside the 1948 territories have no equality in a racist, apartheid Israeli state that treats them like 3rd class citizens.

All Palestinians around the world, joined by our allies and supporters, continue to reject Trump, reject Netanyahu, and demand an end to Israeli colonization of ALL of historical Palestine.

Join the Chicago Coalition for Justice in Palestine on Friday, May 11th, at 4:30 PM, on the corner of Congress Parkway & Michigan Avenue, as we gather for a rally followed by a march to the Israeli Consulate, commemorating the 70th anniversary of Al Nakba.

Protest for #Nakba70 &Right of Return: Stop The Massacre in Gaza